It's one of those CG cliches, model a realistic human head. So of course I had to have a go at some point. I got that chance last year when I had time and while I was getting more into ZBrush. 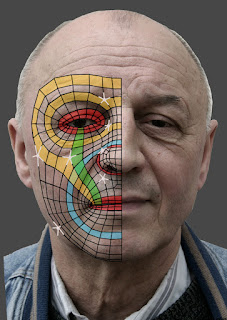 The image ref was some old free human reference from the awesome site www.3d.sk

I did the initial modeling in Maya to create a base mesh.

I then brought the model into ZBrush and began adjusting some forms, some aspects of the head shape, enlarged and brought out the ears a little more and added some asymmetry.

Once I was happy with the forms at this point I went back to Maya to create the UV's (created in a 2:1 ratio to get maximum pixel detail). I then brought it back to ZBrush to continue detail modeling, mainly with alphas to create the small wrinkle and pore detail. Once I had that finalised I created my displacement and normal maps. There was not so much exagerated modeling (overlapping geo) that required a vector displacement so went with the standard height map.

I baked out at 8 x 4k and then did some cleanup on those maps in Photoshop. I've since found out that MudBox does a great job on displacement and normal baking (smoother result with better results at UV seams) so will probably go back to it at some point to create cleaner maps, but they were perfectly fine as is.

I then started the polypaint process. The model's highest subdiv level was 7 and at that level has a point count of 7.2 million, which is plenty to get some good detail into the texturing. I started with the overall colour tones and then started to bring in subtle vein and wrinkle detail along with freckles and other skin blemishes always keeping reference close at hand. 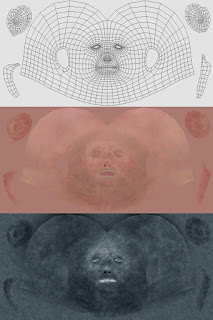 Once I was happy I converted the polypaint to texture and then did my final tweaks in Photoshop and also created a spec map from that diffuse map (which was adjusted later as I went through the shading process). I also created a colour map for each sub dermal layer for the sss shader.

So then the base model was brought back to Maya for shading and lighting. I also created an eyeball at this stage with associated maps. I used mental ray shaders, the fast skin for the most part, just using a mia material x for the eye lenses. For lighting I used an IBL dome with an HDRI attached along with two area spotlights (area light settings in the mental ray tab of those lights along with a custom light shader node for shape of the light source though a ramp node)

So next is the hair which is currently a work in progress. I have created the eyelashes and for the hair I think I'm going to use a Fibermesh workflow and bring back to Maya and use the standard Maya paintfx hair. Why not use XGen you ask? Well I have already dabbled with it and it's great for the initial groom but with mental ray the quality of the shader just isn't great. I think I can get a better look with paint fx. But I'll see, maybe they'll improve the mental ray hair shader to match Arnolds one at some point.

So hope you enjoyed this short overview of my head model, I'll post the hairy head when it's done.

Posted by Anthony Callaghan at 04:32

Anthony Callaghan
I am currently working as a freelance 3D generalist and also working on my own traditional artwork project. I have previously worked on both the Octonauts and DocMcStuffins TV series for Brown Bag Films in Dublin. I also worked in the game industry in the UK for about 8 years. I have worked in most disciplines, concept, UI, HUD and character art and also as an animator. I specialise in 3D, proficient in both 3DS Max and Maya, but always keep a toe or two firmly grounded in the 2D arena.